And Now You Know

This seems to be the worst-selling book on Amazon. Silly Canadians...

inks mostly from Kottke
Posted by Overread at 9:48 PM No comments:

So, rather than work, I'll present to you a long-overdue QUIZ! Yes, yes, you thought that they were gone, and they certainly are endangered, but I did collect a couple of names of tunes, so hey! Why not!

I warn you - these may be all over the place, and I've collected more than the usual clump, so rather than save them all up and dole them out sensibly in small chunks, I'll blow them all today. :)

I
I was standing
You were there
Two worlds collided

What's your name?
Who's your daddy?
Is he rich like me?

It was a night like this forty million years ago
I lit a cigarette picked up a monkey start to go.
The sun was spitting fire
the sky was blue as ice
I felt a little tired so I watched "Miami Vice."

Suzy was in pig tails,
I know I loved her even then.
You know my papa disapproved it,
My mama boohooed it

Well I've been afraid of changin'
because I've built my life around you
But time makes you bolder, even children get older
And I'm getting older too

If you decide someday to stop this little game that you are playin',
I'm gonna tell you all what my heart's been a-dyin' to be sayin'.
Just like a ghost, you've been a-hauntin' my dreams,
So I'll propose... on Halloween.

I understand just a little
No comprende, it's a riddle

Sometimes after a run, I feel completely invigorated and ready to take on the world. This is not one of those times. I think it's because I know what awaits me, siting uneasily in my inbox and on my hard drive.

The first batch of papers.
Posted by Overread at 5:46 PM No comments:

Running Through My Mind

Another sub 5'/km average run! (well, one second under, but still!)

Perhaps I'm running faster because I'm carrying less of me around lately...

Five more weeks of winter.
Posted by Overread at 7:33 AM No comments:

Topic: Overread works better when he is doing many many many things at once. Moreover, having classes all frickin' day on Thursday and an 8 9am Friday morning combo to TA (with prof coming to sit in this week) makes one healthy, wealthy and wise.

The link on top of my Gmail spam folder:

Told You I Live On The Edge

So the result of my not giving the 'How To Write A Paper' speech is an unending stream of emailed questions.

Yes, you have to cite.

This thesis is ok, but try this.

Yes, you have to follow the requirements on the prompt.

Also, unrelated to academic joys, there is something in the office that smells wonderfully cinnamon-y. I don't know what it is. Now that we've got five people in the same small office, there are all sorts of fun mysteries...

I Live On The Edge

Papers are due in on Thursday (not the one I have to write - that's due on Friday - joy.) The danger is in the fact that I didn't spend my standard 30-minutes in class going over how to write a paper. We're covering a huge amount of material, so I used the time to cover content. I don't have first-years in the class (although it is a first year course - joy.), so I'm going on the idea that they've written for university classes in the past.

See how I tempt fate?
Posted by Overread at 9:52 AM No comments:

The problem about starting to try to count calories is learning how horribly unhealthy some of the stuff I love is.

For example - the nacho plate from a big chain restaurant is 2120 calories. Damn. I mean... damn. That's more than I need to eat for an entire f'ing day. I was eating that pretty regularly. I've also discovered that the sandwiches from Quizno's are seemingly marinated in salt, then rolled around in salt, then buttered and covered in a salt glaze. Then they still a big ol' honkin' salt lick in the middle.

Oddly enough, pizza isn't as horrible calorie-wise as I had expected. And the Subway sandwiches are quite good.

I've been tempted not to post this because I figured I'd ruin my luck, but I've lost 10 pounds since a high tide of Christmas. I'm still a bit away from a good weight for my height, but that's okay, I'm built big and I've got some muscle, so I'm not aiming for skeletal.

And I'm going to get a couple of slices of pizza.
Posted by Overread at 6:30 PM 8 comments: 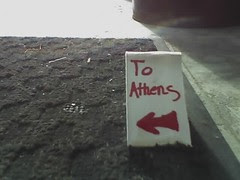 The New Year's Party was a grand success and much joy was had. We're a relatively small department, and a good percentage of us turned up at the hostess's tiny little apartment. We ended up cramming about 14 people in a room that should comfortably fit 10 - tops. The hostess was a whirlwind. She had been cooking since dawn. Two friends dropped by at about 3pm to help, so by the time everyone started arriving around 6-7ish, there were literally mounds of Chinese food. Everything from eggplant dumplings to bitter melon and the most delectable veggie delights (we've got several veggie folks in the department, including the hostess - She did make some kick-ass pork dumplings and a couple of other meat dishes though too).

I guess I'm not emotionally able to enjoy things completely, because I kept thinking, in the midst of all this wonderful warm friendliness, that it won't last. A good percentage of the group will be moving on after the spring, myself included. I'm a hermit by nature, and it's taken a while to get comfortable with these people - my friends. I'll have to start all over again soon.

Things eventually started to break up, of course. I was riding back with a friend who was carting home the car-less. On the ride back I built up a little more self-pity. I always feel envious when I see all the couples pair up and head home. Since I'm moving on to who knows where so soon, I feel that it would be futile to be dating right now, but maybe that's just a rationalization so I don't have to take any chances. I really don't have the time for a girlfriend right now, but wouldn't it be nice...

All in all, a great time, and a wonderful start to the year of the dog! Now, to solidify my good day, after the run, I'm diving back into my thesis goodness.