I've got 3 specific grand tasks that I must get done this weekend.  Why is it that I can't seem to start any of them?  #1 is easy but frustrating and time consuming.  #2 should be fairly easy but involves making decisions that I don't want to make yet, and #3 should be kinda fun, if a little frantic.  None of them are particularly catastrophic, I think I just want a weekend for once.  I want a couple of days in a row where I don't have anything that needs to be done.  Feh.  This whole being a responsible adult thing is so overrated.

Ugh.  I just remembered a fourth and a fifth thing I need to do this weekend.  bleh bleh bleh.

Maybe - I'm still fiddling with the calibration - more on that later

Posted by Overread at 6:04 PM No comments:

More musing about the iSweat Nike+ system:
I set the iPod for a 10k run so I could record a 10k time.  I knew I was going to be running more than 10k, but I figured it would at least get the time logged.  So I go on the run and the iPod says my fastest 10k time is 40'33", which is nice, but it doesn't show up on the online page.  I'm just whiny because that speed would have put me on the leaderboard for my age group :(

I'm such a vain little twit, ain't I?

Posted by Overread at 6:16 PM No comments:

No Kiddie Trailer Yet

Camera Obscura mentioned that I need a kiddie trailer for my bike. Let me tell you I would so very easily use that. It would be jam-packed full of books and goodies in a day or two. This is why it's a good thing that I don't have a car. Too much space...

Anyway, I thought I would present to you a photo of my wonderful wheels: 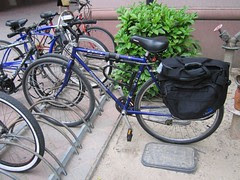 It's a Bridgestone XO-3, which I'm told they don't even make anymore. I've ridden the poor thing for about 14 years now, and only the standard wear-out-ables have been replaced, what a loverly bike, eh?

Got the cool monster-bright led lights fore and aft. On the frame there's an air pump that doubles as a lock, but I forgot the combination (Hey I bought the pump in like, '97 or something, gimme a break), so I can't take it off or use the air pump. I need to get it cut off. The upside is that the velcro attachments can be used to attach an umbrella to the frame joust-style - very intimidating, I'm sure.

The pannier on the side is the Jandd Commuter, which I just started using recently and really like a lot - roomy enough for my giant laptop with all the cables plus some books and other random goodies. I really should have gotten one for each side, but instead I tried to go for something more stylish - the Cannondale CyPod (with a name like that I should have known better). It's pretty and all, but the construction just isn't that great. The zipper is balky and the attachment system is very nice on the top, but quite wonky on the bottom. It works well enough for smaller loads, I guess.

So that's my bike and bag - ain't they cool?

I forgot the cardinal rule of grocery shopping.  I went hungry.

In my defense, the tortilla chips were on sale.

the chocolate bar - not so much.

I also tweaked my ankle, so no run today.

Yes, yes, this in my thrilling life...

Why is my internet so sloooooow at home tonight?  I feel like I'm surfing through molasses.

Also, baseball highlights make baseball look thrilling at all times, but it's not.
Home runs bore me - good defense looks much cooler.
Is it bad that I hope that they find a way to expose everyone who is juicing and that the entire sport collapses on itself?
Maybe they could pare the league down to a more manageable dozen or two teams.  What do they have now?  50-something?  I think Stockbrigde, MA just got a major league team...(with a multi-billion taxpayer funded field, no doubt)

Posted by Overread at 8:56 PM No comments:

I calibrated on the track, but I think it is still a little bit fast.  I'll do a longer run later and see how close it gets.
kinda cool - if I were in the pool last week, this time would have gotten me in the top 10 fastest 5ks in the Nike+ universe (4th place overall, 2nd in my age group).  I'm sure that's just because there aren't that many runners online yet, but it's still kinda cool

Yesterday I said that the students seem to have hit the wall.  I think I may have too, I'm just too dense to realize that my head is pounding into it over and over again.  I'm grading and preparing a prompt for the next paper and thinking of final exam possibilities and I thought - Wow.  I'm going to be doing all of this over again.  We've got two summer sessions here and I'm doing them both.  Yep.  It's all for the good, you see - experience, resume fodder, etc... etc... but it is sucking the life out of me.  And it probably shouldn't bother me as much as it does, but I'm being paid pretty badly - just a little more than I was as a TA.  Needless to say, once I get all of this done, I get about a week to move to NewU and get ready for PhD studies (including TAing the right up front in the fall)

I am really having fun teaching, but I do worry a bit about burning out.  I've seen that happen and it ain't pretty.  If I could only squeeze an extra week or two into that last little break to decompress.

I Can Sneak You In In My Trunk

I think the class is starting to hit the wall.  Absentees are rising and sleepy eyes are drooping.  And that's just on my side of the podium - har har har.  Thank you, thank you.  I'll be here all week - make sure to tip the roast beef and try your waitresses.

Luckily, we're getting into some areas where there are some intriguing and useful audio-visual aides.  I just went to the library to pick up a video and discovered they've got a very very eclectic selection of films.  A very extensive and brand-new-looking Richard Pryor collection was the centerpiece in my opinion.  I think I need to spend more time over there.  I did end up checking out with more movies than strictly might be useful for this class - all in the interests of education, mind you.  So now I've got Netflix and a stack of library videos - VHS though, mainly.  That means I can only watch then in my office projected on the wall.  Good and bad.  Anyone want to pick up some beer and pizza and watch Rashomon with me?

That is, of course, after the grading is done. :(

Posted by Overread at 6:35 PM No comments:

Still uncalibrated - sassenfrassen track team wanted to use their track this afternoon.  The gall.

Posted by Overread at 6:26 PM No comments:

I'm doing some work for a professor who's on sabbatical right now.  I was really stoked because I got through everything and sent it off to her today.

Then I got her email.

ugh.  And of course, I look like a big idiot because I can't even find the email that had the other units (and I use gmail!), but I have a vague memory of seeing them somewhere.

Feh.  So that gets in the way of my grading this weekend and I didn't end up with the time I thought I would have so the students don't get their papers back on Monday.  I can live with that.  Can they?

Posted by Overread at 8:19 PM No comments:

So I did get it to work out, and it looks very nice. I'm interested to see what the 'community' aspects will be when they come out. The little iDot thingie stayed in place just fine, and that's even with me running through the briar and bramble, Oodi-lolly oodi-lolly, golly what a day.
That's why my shoes look so sad, Jayfish, it's all the wilderness out there -the foxes in green suits and the bears with quarterstaves and no pants.

Anyway, I'm using miles now. I'm not sure that I'll keep doing that, but it seems easy to change, so I'll try it out.

I will need to calibrate it though - either that or it doesn't like the way I've set it on the shoe. The route I ran today was 10.20km last week with the Triax system, 6.29mi (10.12km) on the Google Pedometer but 6.89mi (11.08km) with the iSweat. Should be fun though. I haven't run on a track for years. Regardless, the pace was pretty good, maybe the pretty color makes me go faster.

Oh, yes. There needs to be more avatar icons to chose from. The ones they have are good, but there are only 6 or so.

I set up a couple of goals on their goal system, which looks interesting. We'll see how that goes. It looks like you get different medals for how difficult the goal is, but honesty, the higher level goals don't look as nice as the lower level ones.

All in all, I'm pretty happy. See I am basically easy to please :)
Posted by Overread at 4:02 PM 3 comments: