(byt the way, you have to read that title in a John Lovitz voice)
Scrivener has a nice post up about his opening night of Love's Labour's Lost.  I was going to write a reply over there, but my response in a little more personal, so I figured I'd do it over here.

I've mentioned before that in one of my earlier incarnations, I was an actor.  When I went to university the first time around, I majored in Theatre.  Some of the happiest times of my life have been on stage and his post really brought a lot of that back to me.

The first time I really knew I was going to be an actor was when I was in high school and was playing Malvolio in Twelfth Night.  I remember specifically that we never got very many people in the audience because the drama teacher and,  lets be honest, the entire group of drama geeks never wanted to produce anything but deep and meaningful theatre.  Twelfth Night was even a little light for us.  Anyway, I loved that play.  My epiphany came as I was on stage and I had a feeling of complete awareness.  I felt that I had control over my entire body - my voice, my movement - everything.  It was almost as if I were directing myself.

After one of the performances, an older man came up to me at the gladhand line and told me that I had something special and I could teach the others about how to speak on stage.  I was floating.

All of that aside, now that I'm very far removed from the theatre world, I agree completely with something that Scrivener mentioned.  Some of the most valuable things that came out of my time there, especially dealing with Shakespeare, was learning how to read a text.  Shakespeare is hard, and there are still lines that I said hundreds of time that I'm not sure how to explain, but I learned how to dig into a text, read it out loud and try to get into the tempo of the words to tease out a subtle phrase.  Whatever skill I may have today comes directly from those days.

I also remember playing in a theatre in the park production of Cyrano de Bergerac (still one of my favorites - go with the Burgess translation, not the Hooker).  I missed a entrance cue because I was trying to flirt with a girl named Rose.  Ah... the misspent youth...

Numbers 1 & 3 were Roundabout by Yes & All the Young Dudes by Mott The Hopple (yeah, I guess that one was a stretch)

Right then.  On to new and improved quizzing!  (well, new, anyway)

I need some information first.
Just the basic facts.
Can you show me where it hurts?

Welcome to this one man show
Just take a seat, they’re always free
No surprise, no mystery
In this theatre that I call my soul
I always play the starring role

They showed you a statue and told you to pray
They built you a temple and locked you away
But they never told you the price that you pay
For things that you might have done...

I've been singing with my band
Across the wire, across the land,
I seen ev'ry blue eyed floozy on the way

When I was a little boy
And the Devil would call my name
I'd say "now who do ...
Who do you think you're fooling?"

Sheepish asked about how accurate the pedometer is.  Honestly, I don't know.  To be embarrassingly honest, I've never even calibrated the darn thing.  When I say I'm running 8km, maybe I'm actually running a block and a half.  I can say it's fairly consistent - Here are the last few distances on my most common run:

8.14 is the shortest and 8.36 is the longest.  I'm not doing rocket science here, so factoring in all the changes in the way I run each time, a .24km gap doesn't seem that bad.

I should say that I'm using the Triax Elite, and I'm happy with everything about it except the software, which is pretty pathetic really.  For the longest time, I figured that they must be working on a new program, but I guess not.  They're just happy with the old sad thing.  The watch itself is fine, and nice enough to wear during the day if you don't mind looking like a huge geek (not a problem for me).  The little foot pod (I call it my little UFO) is very light - I never even feel it - and very sturdy.  I've run through puddles and tall grass and up and down rocky hills and all sorts of places, and it's stayed together.

So like, I know the paper's due Thursday before lecture, and I know it's 3am Thursday morning, but could you look over my thesis statement?

Different duuuude (approaching as I get ready to walk over to the lecture hall):

DD: Hey Overread!  Can you take a look at my paper?

The cooler thing is that it looks like half of DD's paper is Wikipedia and the other half is oddly transcribed bits from the lectures and chats with me.  He's a cool duuuuude, but it looks like he's going to crash and burn on this paper.  I should have seen the warning signs when he started angling for grades the day before the paper was due...

Oh, did I mention I'm finishing my thesis?  Yes?  I did? Oh, well.  Did I mention that I have no time to grade papers or plan for tomorrow's lecture either?  Can I just have them read quietly at their desks?

Oh #2.  I just reformatted my thesis to university guidelines and it looks like I'm going to be waaaaay over minimum.  That's good, I guess.  I've still got a heap of editing (and writing!) to do though.

The battery died in my pedometer so I don't know the exact distance, but it's the exact same run I always do.  So predictable I am :(

I loves me some found treasure 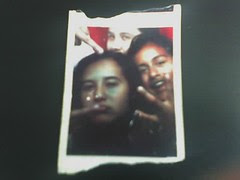 The Evolution of Dance

via Boing Boing
Posted by Overread at 11:16 PM 4 comments:

You know it's really bad when you get really excited when a student emails you with a paper problem that you can answer really well and in depth.  Well, I guess it's only really bad when it's a question you could answer in one line, but because you should be writing thesis you happily decide to write a monograph on the history of the problem the student raised and your personal take on all the sides of the argument.

Hey!  I was helping a student!  I was facilitating education!  The wisdom-ifying of our nation's future!  It wasn't procrastination at at all!

A Long Walk and a Short Pier

I've never really cared much for the 'walk across the stage and get your diploma' thing.  I did it in high school because it wasn't really an option, but I've been able to avoid it ever since even though I've had a few opportunities.  The thing is, it just seems like another manufactured celebration designed less to express pride in hard-earned accomplishments and more to stroke egos and siphon cash.  In this line, see class rings, yearbooks, most student government, etc. etc...

Reason I bring this up is that I think I'm being kidnapped and forced at diploma-point to walk for my MA.  My fellow grads told me I had to.  The admin folks demanded that I had to, and most difficult to duck, the department chair, who I really like, asked me to.

feh.  renting a gown is how much?  My funding didn't cover wardrobe.

So I've got this thesis thing.  I imagine this seems normal to all you academic folk out there, but I've never dealt with a long-term project lie this before.  The deadline is approaching in a most unfriendly fashion, and although I've got enough ego for several folks, I'm beginning to realize that I don't know what the hell I'm doing.  I'm terrified of sending pages to my advisor because he's going to realize what a vapid hunk of crap they are, revoke my recommendation letter and get me kicked out of PhDland before I even get to go.  Then of course they won't let me teach the summer course (and let's face it, that may be better for all involved).  In a month and a half I'll be asking strangers if they want fries with that.

The funny thing is that I'm used to reading about how many academics have the whole 'what is the world discovers I'm a compete fraud?' complex, but for some reason, I didn't think I would get that.  But now that there are more things riding on my performance, I see myself feeling exactly that.

I always thought the trick was never to give anyone the impression that I thought I was anything more than I am.  That way no one would ever be surprised to realize that I don't know jack and I haven't read Foucault.  I guess that plan didn't work out so well.