A Stitch in Time Saves a Quiz

I thought I was going to get Camera Obscura on the #1 question, but Bozz Skaggs and Rita Coolidge use the exact same phrase:

Outside the rain begins and it may never end
So cry no more, on the shore dream
Will take us out to the sea
Forever more, forever more

Same basic song, but different titles and the endings are different! So, I doff my hat to you Oh, most obscura of cameras!

The only one that caused grief was #10. It was Get Out the Map, by the Indigo Girls, but then you knew that already, didn’t you, you naughty googlers :)

Nine a.m. on the hour hand
and she's waiting for the bell
and she's looking real pretty
just wait for her clientele

Trying to make some sense of it all,
But I can see that it makes no sense at all,
Is it cool to go to sleep on the floor,
'Cause I don't think that I can take anymore

See the smile a-waitin' in the kitchen,
food cookin' and the plates for two.
See the arms that reach out to hold me,
in the evening when the day is through.

But I’ll be lonely without you
And I’ll need your love to see me through
Please believe me, my heart is in your hands
And I’ll be missing you

Sit down, take a look at yourself
Don't you want to be somebody
Someday somebody's gonna see inside
You have to face up, you can't run and hide

’cause the free wind is blowin’ through your hair
And the days surround your daylight there
Seasons crying no despair
Alligator lizards in the air, in the air

She gets up and pours herself a strong one
And stares out at the stars up in the sky
Another night, it's gonna be a long one
She draws the shade and hangs her head to cry

Still looking for that blue jean, baby queen
Prettiest girl I ever seen
See her shake on the movie screen, Jimmy Dean

Well, the rain exploded with a mighty crash as we fell into the sun,
And the first one said to the second one there I hope you’re having fun.

Sorry to deletees corndog and zerodoll :)
Posted by Overread at 5:40 PM 4 comments:

So the professor is ending the lecture, but there's still time left and he's still giving out information.  He's not just chatting or anything.  There are ~100 students in the class and once they figure class is wrapping up, a whole lot of students rumble around packing up and talk amongst themselves.  I look back (I'm the TA), and see one of my students in particular joking loudly to the person next to him.  Grrr... Overread gets ticked.  The professor has been having a hard time holding their interest throughout the class anyway, but we're not even halfway through the term, and I'm afraid it's only going to get worse.

So.  After class is over, I go over to the students that I saw talking and tell them that they need to be quiet while the professor is speaking.  They protested their innocence.  I was probably a bit forceful, but I don't think I was particularly nasty.  I made it clear that they were disrupting the class, and this was unacceptable.

I know this seems minor, but it was a pretty big thing for me.  I really don't like doing that sort of thing, especially with a big audience (all of their classmates were around).

Posted by Overread at 2:56 PM No comments:

Well, joy.  I've found out that I do need my thesis committee chair's signature physically on a special piece o' paper (no faxing allowed) contrary to previous assumptions.  He's in...  Well, let's just say he's far away in a place where reliable mail service is a little less than the standard (it was suggested that I mail off three copies so that one might make it there).  The practical effect is that I'll need to have that thesis done about a week or two earlier than I had thought.  Poop.

On the plus side, just for kicks, I put all of my thesis files into one big one to see where I'm standing length wise, 'cause - hey, it beats actually writing, and it looks like, if things go well, I'll hit right around the length that I was aiming for.  It's a bit weird to see it all together though.  It's almost as if it's a single thing now.  Spooky.

On a topic-related note, a few of the amazon packages are arriving today.  What are the odds that I won't go home early and giddily rip open boxes?

Posted by Overread at 2:42 PM No comments: 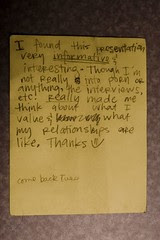 I feel like I need to confess.  When I went to the conference a couple weeks ago, I promised myself that I wouldn't buy any books that I absolutely didn't need.  So I didn't.  I waited til I got home and I bought them all on Amazon.  Why! Oh cruel cruel dark mistress Amazon! Why must you taunt me with your universal purchasing options.

Seriously.  So far they've broken it up into five packages.

Accent: Hmmm… Well, I grew up in an accent heavy place (a bit southern-ish), and I spent a lot of time in theatre classes trying to keep a ‘mid-American standard,’ but truth be told, my accent depends on who I’m talking to. I think this happens with a lot of folks in my family. Oh, you should hear my mom talk to my grandpa – fun fun fun :)

Booze: Not much, really. I had my drinking phase (theatre world, again), but it never was that big a deal. That being said I was dragged off to two parties last weekend, which is unheard of for a hermit like myself. I took advantage of the two for one happy hour special and had way too many margaritas. Frankly though, I don’t like tequila unless it’s in a margarita or another froo froo drink. I usually go for vodka.

Chore I Hate: Um… anything! I’m a lazy lazy guy, doncha know? I did just do massive amounts of laundry and get a haircut, all in the same week, so maybe I’m getting better.

Dog or Cat: Cat cat cat cat and cat and then cat. See the thing is that I love all sorts of pets, and I grew up with a menagerie befitting my living in the countryside (seriously, at one point, we had a sheep. Lamb? Sheep. Maybe. We also had multicolored ducks and I spraypainted chicken poop fluorescent orange once, but those are other stories for other days). So the thing is I love dogs and cats, but I really really want a cat. A furry little purr-ball like the ones of Cute Overload. Yes. Of course I realize this doesn’t jibe well with my chore hating, but hey - I am large, I contain multitudes. Thanks Walt.

Essential Electronics: Yes. All of them. I should also say though, that it is refreshing to go screenless for brief stretches.

Favorite Cologne(s): I’m another in the anti-cologne camp. In junior high (?), I once saved up a huge amount of money to buy a bottle of White Linen for a birthday present the ultimate-love-of-my-life-who-I-couldn’t-be-without-and-my world-would-come crashing-down-if-she-ever-left-me-even-though-she-was-dating-that-other-guy-and-routinely-crushed-my-spirit. I was so proud of myself for casually finding out what she wore early enough that it wouldn’t seem obvious. So I gave it to her, she seemed happy and while we were talking in her bedroom (in her bedroom! Oh bliss upon bliss), I saw that she had received another bottle of the perfume from her grandmother. “She gives me a bottle every year.” Thank you. And I don’t like perfume.

Hometown: Small city near a bigger city in a state that is unassuming enough that I have to regularly explain it’s location to foreigners. And some Americans, too.

Kids: I hope so, but it seems I’m a little behind the game on that one.

Living arrangements: Uck. Small room in an awkward house under the flight path of low-flying airplanes and the rumbling tracks of the railway. It is a good biking distance from campus though.

Number of sexual partners: See above :)

Phobias: I do get vertigo, but it’s kind of attractive vertigo. I’m a bit like those little yappy dogs who run up to the bigger dog, bark and then run away, only to do it again. Each time I’ve been on the Eiffel Tower I force myself to go to the edge and then I run back and try not to notice the swaying of the whole friggin’ tower. Then I go look again.

Quote: What? I just quoted Whitman, for crying out loud! Aren’t you even paying attention?

Siblings: One sister, one brother, both older. You guys probably know ‘em too :)

Time I wake up: Not as consistently as I should. Recently it’s been about 7 or so.

Unusual talent or skill: I can juggle, but only 3 items. I actually had to learn for a part in a play in college (Major Barbara). I had to juggle on stage as part of a sight-gag. Fun, but nerve-wracking.

Vegetable I refuse to eat: None! Gimme veggies! Gimme veggies! I even love brussel Sprouts and beets and oh… I’m ok with mushrooms, but it’s taken me a while to get on good terms with them...

Worst habit: Not finishing what I start. Finishing the MA while applying and negotiating the PhD thing has been a huge test of that.

X-rays: No, but I always wanted to buy the eyeglasses.

Yummy foods I make: (first of all, that was a stretch to get something that started with a 'Y') I used to make a kick-ass turkey chili, but I haven’t cooked in so long…