Back on Track, er... Sidewalk

Well, it's certainly a different kind of running here in Newtown. Hills. Wow. Again, I didn't realize that there were so many hills here. There's the sharp quick ones that make you stare at your toes and the long gradual slope ones that make you rethink religion. I think this is a good thing, but it'll take some getting used to.
Lots of crosswalks and glancing around for cars making right turns without turn signals. On the plus side, there are a lot of runners out there, or at least there were this morning. I looked online and found a whole lot of running routes, and some even go into some kinda green areas, but most of them are longer runs. I think I need a few mid-range runs to get me back into stride before I do that.

The roommate is coming today. I really thought I was past the part of my life where I would have roommates, but I guess that's poverty for ya. He says he's bringing a table and some chairs and maybe even *gasp* a couch! Maybe it's not so bad a thing after all.

Anyway, before he comes, I'm going to head out and do a photo walk. I might not have any free time once school starts up next week, so I'd better do it now, right?
Posted by Overread at 10:37 AM No comments:

It's funny how something you half expected to happen can really hit you hard when it does. I just talked to my ex-girlfriend last night. We used to joke about the fact that the last three women I dated got married within a year of breaking up with me.

Last night she told me she got married in June. I'm still processing it, and I am really happy for her, but damn. It hurts a lot more than I thought it would.
Posted by Overread at 7:34 AM 7 comments:

Best description of someone who went mad:

"She became mentally absent."
Posted by Overread at 3:08 PM No comments:

Best spelling error that spell check isn't going to get you out of:

Nominee #1
The nation was run by technicians and bearcats.**


* In the best tradition of the Oscars, Tonies and Razzies, the Oopsies are the awards given to outstanding achievement in inadvertently making the instructor laugh.

** Original sentence altered to protect those who don't proofread.
Posted by Overread at 12:33 PM No comments:

Bullets Over A Street Other Than Broadway

Posted by Overread at 4:23 PM No comments:

I finally made it to New to You U. That's not going to be the name, by the way. As proof of my move, I give you a photo of my new neighbor: 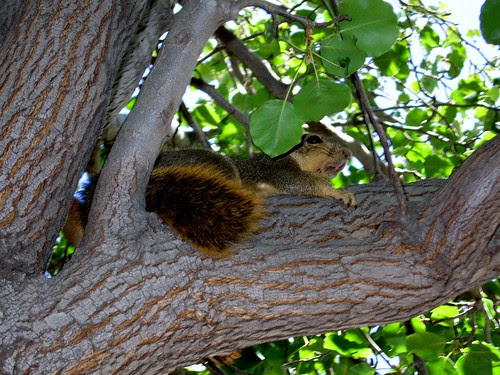 Look at those teeth! Big sharp pointy teeth! But, he (she?) could probably use some of those whitening strips. I thought about photoshopping them white so that they poor dude wouldn't be embarrassed, but in the end I didn't.

The move went surprisingly well considering all the trip-ups and silly mistakes I made. That's a story for another day. On the completely cool upside of things, there was a massive blogger meeting (which also happened to be a family gathering) and much fun was had by all. Again, I'll post more about the move itself later

The campus here is very nice. We've got the 'old and ivy-covered' niche pretty well taken care of with a healthy dose of 'holy crap where do they get the money to buy the new buildings' sprinkled in to taste. There was a mild aggravation when I tried to access the internet from my new place. It seems that they need you to install a piece of spyware that monitors your computer to make sure your anti-virus software is up-to-date. That's evil, but understandable. problem is that their spyware doesn't support Windows Vista. hehe advanced spyware protection, wot?

Aside from that hiccup, things have gone pretty smoothly. I've wondered around quite a bit and taken a few pictures. I think I need to block out a good long photo-tour though. Of course, most of you folks wont get to see that 'cause you'd figure out where I am and come stalk me. :)

So now I'm off to try and get some grading done. I've escaped the old place, but not the old place's work. Sigh.
Posted by Overread at 12:33 PM 2 comments: