From the Link Dump Truck

I'm hoping that by posting a couple regular posts with no real content, I can get back into the swing of things, so here ya go.

Do we really need the entirety of the pope's mass televised on CNN?

Surely there is news out there they could be covering.
Posted by Overread at 7:23 AM 1 comment:

Posted by Overread at 6:54 PM No comments: 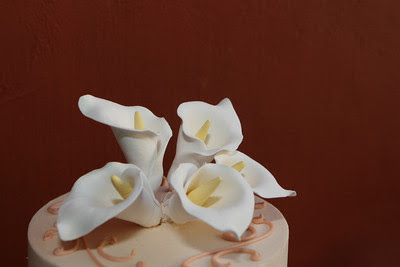 Well, it's been a week, so I really should have blogged this already, but I'm doing it now, so there you go.

Most of the bloggy folks who come here are likely aware of the ever-so-sweet romance between Jayfish and Zerodoll. So, last Sunday was the big day - they got hitched! I was there, so you get a rather rambling play-by-play! Yea you!

I wasn't able to spend much time in town, but I managed to get in on Friday night despite the best efforts of the driver of the airport shuttle and its 'exact change only' policy to thwart me. Friday night I got to see their new house, which is huge and beautiful. The house is a great non-cookie-cutter place, with very fun nooks and crannies and switches that most probably turn on dark and mysterious machines, but for now only seem to make click noises. They've got a ginormous orange tree in the back yard, along with many other curious plants and shrubs and such.

On Saturday, the Fish side of the family got to meet up with the Doll side of the family. For the Dolls, this weekend also served as a sort of reunion, too. Folks flew in from everywhere, adding that much more to the festivities. It was a very happy gathering with a creche-full of babies and toddlers and also my eldest niece who is (how in the world did this happen?) five years old. She has also apparently learned to speak Chinese by watching TV. There was banjo playing, and some singing (alas, no karaoke), and even some attempts on the piano by niece the second. Not to leave any niece out, niece the third is only few months old, so she played that card and giggled and cooed and charmed us all.

Conversations of all manner of everything flowed well with wine and beer and various snackies to complement the pizza. Soap bubbles floated about, reflecting the paparazzi-worth of flashes going off as we all tried to catch good shots of the happy couple, or the babies, or any number of other shiny objects. A very good time was had by all.

The day of the wedding came, and as one of the folks with a big camera, I headed over to Casa Dollfish to document the hair and clothes and nerves and general happiness. If you don't know, Zerodoll is gorgeous, and Jayfish is a sharp, sharp-looking guy. When you dress 'em up in a tux and gown, damn. They're a great looking pair. I should note that Jayfish wore the tux and Zerodoll wore the gown. They could have gone the other way, but I'll stand by their choice.

The park where they had the ceremony is really nice. There's a wonderful view - water, sky city, trees, it's all really pretty. It was a touch chilly, and there was a good stiff breeze coming over, but everyone held together in good cheer. Scarves were playfully batted back down and the infectious happiness spread to all. The ceremony was purposefully short, but very moving. A few well-chosen words, a recitation, vows they wrote themselves, a kiss, and done.

Another Hollywood opening's worth of photography, and we all hopped into cars to head to the reception.

The reception restaurant was the one where they had their first date, well, the end of it anyway, sort of. If you want that story, you'll have to ask them. We got there a little early to arrange the namecards and such. The cake came with a slightly unexpected accent-color, but was more than beautiful anyway (Yummy too, but that's later). The guests began arriving, and the mood of friendly joy kept everyone up.

As brother of the groom, I had been given the first speech, which was long-winded and slightly garbled by my voice breaking near the end, but no one seemed to mind much. Jayfish and Zerodoll, stood and welcomed us kindly and sweetly with a much better control of voice and length, and then Zerodoll's mother also stood and said a few very nice words, nicely put.

Then the meal began. J&Z really went all out. It was simply wonderful. I can see why the first date went so well. 4 courses and 7 or eight dishes later, they got up and cut the cake together, and we all had our pieces.

It's kind of funny, when I look over that, it seems almost like it's just a standard wedding. Maybe that's the impression you'll get too, but I can't help but be so happy just recounting it. J&Z and my family mean so much to me, it's anything but standard to me.

Cheers to you both!
Posted by Overread at 1:12 PM 1 comment:

Anonnymous to the very very very young girl in front of me in line buying an E.P.T. kit this morning: Good luck.
Posted by Overread at 1:10 PM No comments: