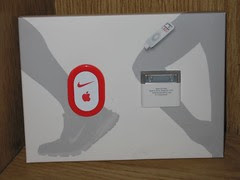 So before the little papoose arrived, I knew I would have to update the iPod and iTunes - so I did that a couple of days ago. No worries, right? No. :(

I got the little nubbin and its buddy in the mail, plugged him in, but got the standard error message: 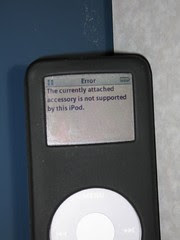 Sadness. I hunted around until I found that I needed at least version 1.2 software on the iPod. That shouldn't be the problem though because I just... wha?! I've only got 1.1. But didn't I just...? No. I guess I didn't. I guess you can't count on the iTunes software to update your iPod - sad. Anywhoo, I found the manual update download, and it's not an update, but an new install. Ok, no real worries there, I guess. Odd, but should still work ok.

Part of the joy of a new install is a wipe of everything off of your iPod. Thanks. After a mandatory reboot, and a lockup of iTunes and the iPod updater, I finally got the software updated. Or so I thought – more on that later.

Now it’s all about getting the shoe and the dot thing (iDot?) happily in my shoe. I’ve long been an evangelist for the old Nike Triax system, but wow. 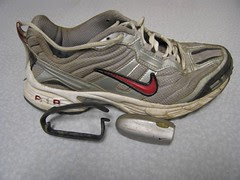 Look at the size difference. 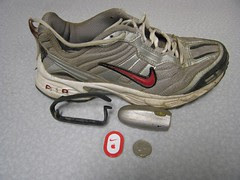 Now I didn’t buy the special iSweat shoes, but I’ve seen a lot of people use Velcro or tape to get the iDot stable, so I didn’t think I needed to. I liked the idea of Velcro, so I went that way.

A little trim to fit and voila! 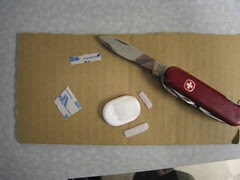 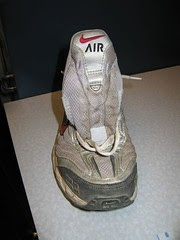 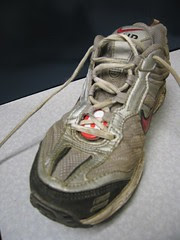 I decided to sew the Velcro strip to the shoe just in case – I really should have gotten two kinds of Velcro – the sticky kind for the iDot and non-sticky for the shoe, because sewing through the sticky led to much grief and sadness.

But, the attaching seemed to work out in the end.

The software and the iPod itself – not so much. I wrote this about 6 or 7 hours after I started to get all of this together. I think I’ve finally figured out what happened. The original update didn’t go through somehow. Maybe it was part of the whole wiped iPod effect. Anyway, it seemed that the iPod thought it was all scrubby-cleany, but wasn’t. All the music and such were gone from the iPod, and it showed the new update, so I thought it was good too. The problem must be with the computer, right?

The computer could only see that there was a kind of a hard drive there, but nothing else. I tried reinstalling just about everything several times and rebooted until my foot was sore. I ran into the ‘Service cannot be deleted’ error (I still don’t know what that means). I ran into the ‘iPod cannot be mounted error’ (which at least makes sense), and much more amusment. So it came down to me finally figuring out that everything on the computer was fine. It was something about the iPod. Thing was that the updater would lock up the computer when it tried to talk to the iPod and Windows couldn’t even open up the hard drive that it thought it saw. The trick was that windows did give the drive a letter. So, back to the dark ages with you! I opened up a dos prompt (they aren’t actually still called that, are they?) and did a ‘Format E:’ it took a really long time, but eventually did format the whole thing. One more crash out of the updater and the second try, it worked! Unfortunately, it’s too late now to go running.

Overall, the install was not smooth. I know this was supposed to be designed to work well with Windows, but it just didn’t (for me anyway). Maybe this is my reward for saying nasty things about Macs. Frankly, I think it confirms my point. Mac software is luscious when it works, but when it breaks, it never seems flexible enough to pull together. It’s a good thing that I’m easy to please in the end. If the thing will work eventually, I’ll be happy. I really want to love this thing.
Posted by Overread at 6:39 PM 1 comment:

This is the best and most accurate map ever.

I went to a funky little greasy spoon for breakfast this morning - I had a giant every-veggie omelet with spicy Louisiana sausage. drooool.  I'm proud of myself for not being able to eat the whole thing though.  Seriously, it was big enough for two people.

Oh yeah.  One downside of the breakfast.  It seems that on weekdays, they don't get enough traffic to have fresh biscuits ready, so they microwaved mine!  Blasphemy against the biscuit gods!

Ok, so the Post Office wants to put out stamps of DC comics super heroes.  Fine and good.  I'm a fan of funky stamps and I'm not opposed to super heroes, so all is well and good.  Or so you would think.

Take a look at the selections...
Superman - sure, you've go to have Superman - he's the icon.
Wonder Woman - naturally
Batman - absolutely
Green Lantern - Ok, I can see that
Aquaman - Well, alright.  No one likes him, but he was big at the time, so ok...
Supergirl - not that crucial, but it wouldn't do to only have one super-heroine
Flash, Green Arrow, Hawkman - eh, but ok

Good thing I haven't actually sent a letter in forever...

And, yeah, Jayfish, you're right - turning off the TV is the best option I'm doing that more and more often because every time I turn on CNN, it's that god-awful shrill example-of-the-worst-in-all-lawyers Mary whatserface or that new monstrosity who-said-we-need-another-'personality'-instead-of-news Glenn Beck. Sometimes its even worse - Larry King

Also from adweek's blog - did you know that Bush was such a singer? How about Blair?

Added a little extension on the run and came up with a 10k!  woohoo

Funniest moment of the day - I just finished showering after the run and was drying off when a woman walks into the men's locker room.  She took a look around and spun around.  Muttering ohmygodimsorryijustwalkedintothemensohmygod, she headed back out the door she came in.  Perhaps having a door that leads right into the shower room might be good for the swimmers, but not so good for the absent-minded.

completely unrelated, but if I were a woman, I think I would be an angry angry woman.  If I see the 'Get your girl on' commercial for the Hummer monstrosity one more time... and high heels, I mean, c'mon, who's running this place, anyway?

I've been a geek pretty much all of my life, and I'm fine with that.  My first computer was a Vic 20 (Thanks Santa!), and I've had a computer ever since then (except for a brief period of time when I was off living the off-off-off-off Broadway life in NYC).  So, I've given a lot of thought to the whole PC/Mac tension.  See, the thing is that I really love the stylings of the Mac.  I love the idea that it doesn't crash as much and that it's elegant in so many ways, software and hardware.  The Mac designers really seem to care about the way that the computer is used and the way that it looks as well as its performance (We'll say nothing of stories of laps being singed by overheated Macs).
But, here's the thing - The Macs don't do all that I want them to do, or at least not as easily as the PCs.
A Mac is probably the best choice for digital image and video editing, of which I do a fair amount, but that's not all I do.  I have grown very accustomed to being able to try out all the new software right when it comes out.  Betas and alphas, shareware and demos - I love 'em all, even when they don't love me back.  Windows does crash for me on occasion, but it's a wonder it doesn't crash more often, with all the crazy stuff I've installed and uninstalled over and over.  Windows has to be flexible enough to handle any little garage startup software company's devilish designs as well as the vast majority of the black hat bad boys trying with all their might to bring down Aunt Bessie's 486.
I love options.  I love being able to choose between many many options when picking out word processors and music players and funky field-specific mashups, some of which I can't find even one option for on a Mac.  I also play video games (or used to anyway, when there was time), and the outlook for Mac gaming is fairly gloomy, despite some noble attempts. For Macs, the recent victory here is that Civilization IV just came out for the Mac.  It came out for the PC last October.

So the end result is that the reason I don't think I could ever buy an Apple is the exact reason I bought an iPod.
I'd used and loved the Creative Zen Micro MP3 player for quite awhile, but I was always frustrated by the fact that I couldn't get accessories for it.  If I wanted an arm-strap to use when I run, there were only a couple of options - mostly style-deprived ones.  Because of the rather sickening rush to be a cool kid with an iPod, all of the accessories companies went crazy putting together all the toys that I wanted, just not for my MP3 player.
So popularity bred coveting, if not of the product itself, than of the options that the product presented, and I hate that.  I do not want to be one of the cool kids.
I still hate the fact that you can't change the battery easily on the iPod, that it seems to be designed to be thrown away eventually, you can't get radio reception with it,  and that it's not easily separated from iTunes - it's not that I dislike iTunes that much, although I'm not really a fan - it's just that I don't like being told what software I should be using.
The last straw that crushed my resistance was the Nike/Apple pedometer system (although it needs a better name.  They call it the 'Nike + iPod.' Isn't that more of a description than a name?  What about iRun?  iSweat?  iNike?)  I use the old Nike system.  The software and support was never that good to begin with, and it looks like they're just never going to update that anymore, and the new Nike online system looks useful and stylish, so there I go.
I got the 4GB Nano and a nice armband for running and a little prophylactic sleeve thingie to keep it umm... safe.  It certainly does look nice, doesn't it?
The pedometer is rumbling its way toward me thanks to the fine ladies and gentlemen at Amazon.com, but I ain't buying any of those 'designed for the pedometer' shoes from Nike.  I'll either cut a little hole into my innersole or velcro it onto the tongue of the shoe.  Feh.  I already feel bad enough for caving in on the iPod thing...