Oh, I almost forgot to link this. Since we were all um... excited about mannequin boobs and nipples and such, note that we aren't the only ones (link perhaps not safe for work).

winning quotes from the article:

The realistic-looking mannequins ... can have realistic silicone nipples added.

Instead of being designed for naturally big breasted women the mannequins' breasts are abnormally high up for their size suggesting they are modelled on women with implants.

Now, for me, I'm just wandering about the R&D folk who are tasked with designing the 'realistic silicone nipples.'
Late at night, sequestered in a dark mad scientist's lab deep in the Hot Topic R&D in Hoboken, they try experiment after experiment, failure upon failure, nearly giving up their noble cause - "Dammit! They still aren't realistic enough!"
Then, one night, or was it early morning? Several empty pizza boxes and three interns (of normal bust size) are sprawled around the lab having finally succumbed to exhaustion, their nipple reaction surveys scatted over the desks and floors. Suddenly, Dr. Headlamp stands up in disbelief. "Good God. It's done. They're... perfect."

And they say that the sciences are dying...
Posted by Overread at 5:10 PM No comments: 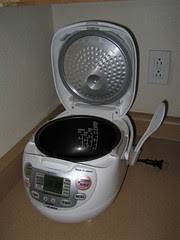 So there's the photo of the day over at the photo365 blog, and maybe it requires a bit of explanation. I used a little bit of Christmas money to get it and so far I'm really really happy.

One of the things I'm trying to do more is cook at home, which oddly enough seems a lot easier when I don't have to run all over campus all day long. We'll see how much I'm cooking next week when school starts up.

Anyway, back to the rice monster. It's a Zojirushi NS-ZCC10. I did a fair amount of research before choosing this one, but lemme tell you, trying to figure out which rice cooker is like asking a room full of 14 year olds if the PS3 is going to be better than the Xbox 360. It'll only end in tears, with each side retreating to prepared fortifications of bias and loathing. It looked like most of the big brands were all reliable and honestly pretty much the same. I ended up with the Zojirushi partially because I love their little elephant icon. (that's not entirely a joke)

I've only used it a couple of times so far, both with a nice jasmine rice, and each time the rice turned out wonderful - fluffy and fragrant and just perfect. So far, the rice has been a nice part of a kung pao chicken (so-so, I used a pre-made sauce. tsk tsk.), a couple iterations of fried rice (lessons learned - eggs in a carton: not bad! ginger - very strong, I really didn't need to put so much in) and as a base for a chili. So far, all very nummy. I would have taken pictures for you all, but frankly, none of them were particularly photogenic.

I'll post a little more about it once I try some more rices and get a feel for all its extra settings.

Posted by Overread at 4:53 PM No comments:

Shave and a Haircut - One Freak!

I guess today's picture really should have involved what happened when I went in to get my hair cut today...

So I show up at the barber shop and there looked like there were two stylist folk working there today. They were both taking care of people so I sat down and pulled out a book to read while I waited. Then a guy came out from the back area (or at least I thought he did at the time - in any case I hadn't seen him when I came in). He walked around a bit like he worked there, so I looked up and tried to make eye contact to let him know I was next in line.

Then he sat down in one of the barber chairs. and started to cuddle with a tupperware bowl full of... something.

Maybe he's on break? It was about lunchtime, so that's not unthinkable. I'll just wait until someone calls me.

One of the stylists finished, but had an appointment come in right then, so she took her over to the chair where the odd man was sitting. She said something and the man replied, "No, man. I need this chair. I need it because my family died yesterday."

There was more mumbled conversation and the man finally is moved to another barber chair, but he didn't sit down. He stood up in the middle of the barber shop and crosses himself a few times (kinda like Sammy Sosa used to - quick, kissing his fist after each time). Then he jumped on the ground and pounded his fist on the tile a few times before jumping back up and starting into a kung-fu shadow boxing routine.

He was actually kinda good.

While he was doing this he started mumbling about all sorts of people, George Bush ("that rat - he's the rat. I ain't no rat"), John Elway ("me and Elway, there's nothing you can do about that, me and Elway), Bruce Lee ("This one's for you Bruce Lee, man Bruce Lee man") among others that I couldn't quite hear.

Partway through his routine, ignoring polite requests that he "take that outside, please," He started dancing behind the mirror of one of the stylists, looking at himself and posing behind them. So, she's there cutting hair, and this guy is jumping all around right behind her - and the poor woman who just came in to get a trim.

Oh, and now he's occasionally jumping over to the walls and pounding his fists against them too.

Finally, he calmed down a bit and moseyed over to the cashier's table and started doodling on the appointment pad (he must have taken it, or maybe he didn't actually write anything, 'cause I looked afterward and could see anything interesting.)

After awhile, he left his stuff there (hoodie and one sock) and paced out into the hallway. While he was gone, the security folks came in and asked about him. They couldn't find him.

Security left, and the man strolled back in, got his stuff and left.

I got a pretty good haircut.
Posted by Overread at 6:38 PM 4 comments:

The Brightest of Stars has decided to start a Photo365 blog (hers is here) and I think the idea is just so peachy, I've gone ahead and stolen it! So here's my day #1!

Anyone what to start a pool to see how long it lasts before I give up? Everyone put in a nickel and guess the date!
Posted by Overread at 10:56 AM 1 comment:

Slower and slower! But hey, it was really windy today. and chilly. So there :P
Posted by Overread at 10:30 AM 1 comment:

Posted by Overread at 9:56 PM No comments:

Open Letter to Woman at the Grocery Store

Nonchalantly telling your child it's ok when they knock a few glass jars of olives onto the floor (where they shattered and spread glassy olives throughout aisle 9) isn't horrible really, but adding, "there are people here who'll clean that up" earns you scorn points!

And I thought I would wear out my scorn gland when you then proceeded to pick up a bottle of bacon bits, open it and stuff your festering gob. Yes, you actually poured bacon bits into your mouth. Well, most of them I imagine landed in your mouth. I know that a lot of them also were added to the glassy olive slurry on the floor.

I know it's not good to judge by appearances, but you seemed like a well-to-do lady, and your children looked healthy and nicely dressed. Maybe it was a bad day. I don' have kids, so I can't know the mental strain that it puts you under.

No, that's not an excuse.

I'm confident that I am not the first to do so, but let me offer you a sincere and hearty dollop of Good Wishes for our upcoming new year. I herein disclose my hopes (A note must be made that the entirety of my hopes for you in the coming year are boundless and cannot be contained in simple blog form, or for that matter, within the conception of the human brain, my own included. The following is simply a very brief outline of the highlights):
As mentioned above, this in no ways encompasses the totality of my wishes to you, dear reader, for the upcoming year. In fact, I could probably narrow it down quite a bit. Let's try:

I hope that you will be well and not get hurt. Unless you are both into that. Which is cool by me.
Posted by Overread at 2:01 PM 4 comments:

Posted by Overread at 2:00 PM No comments: