'kay, no thoughtful post today. Just a couple of pictures.

Miniland has a waterfall: 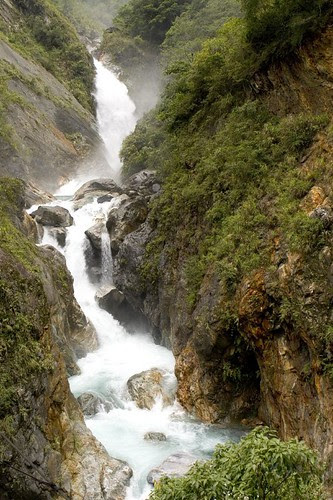 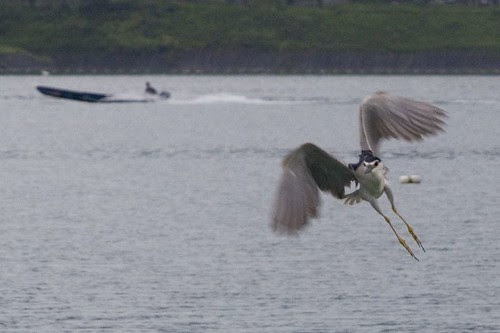 I’m a masochist in a lot of ways really. My school year starts a bit later than everyone else’s, and I’m very jealous.

Did I mention I’m jealous? Jealousy is a big part of it, but it's nervousness and excitement too.

I should be building PhD applications and knee deep in materials for my thesis. I should be cleaning and rearranging my tiny little room so I can move the rest of the boxes in. I should be back on my running schedule, but instead I sit here in my chair in my office living vicariously through those of you who have already begun again.

The plot has stopped thickening.  After telling me he had no intention of calling her, the collections agency guy called my friend’s mom immediately after speaking to me.  I can only assume it didn’t matter to him if we all believe him to be a liar and in general a slimy human being.  I guess that’s just part of the job.
In any case, the case is closing.  The agency will get a little bit of money from both my friend’s mom and myself (in small doses over time).  The slimy man will get his cut, and everyone will go home without resorting to legal joy.
This is the best solution, I guess.  I’ll be able to unsuspend my license in a few weeks, although it just happened to expire while suspended, so I get to take the test again.  I’m sure that will be a barrel of laughs.
Stewgad mentioned in comments that my friend’s not having insurance was the big problem in all this.  I do agree to a point.  If only she hadn’t let her coverage lapse, so many things would have gone more smoothly, and certainly never would have gotten to this extreme.  However, I have a hard time blaming others when I can legitimately blame myself.  I was the guy who was driving when I hit the other car.  That’s the fundamental start of all of this.
The great thing is that all this trouble hasn’t soured our friendship.  Maybe someday much later we’ll have it out and accusations will fly, but for now we’re still friends and I’m lucky to have a friend like her.
Posted by Overread at 11:46 AM 1 comment:

The person who had this room before me was certainly a classy gentleman. Although I did take down from the wall the magazine pages hung in homage to Sapphic lust, the scotch tape he used to secure them that alternately ripped paint from the wall and refused to come down at all will provide forever a way of remembering him and his decorating wisdom.
Posted by Overread at 7:49 PM No comments:

Can You Hear Me Now?

Oh, fun. The ringer is dead on my cell phone. Is this just an excuse to get a new phone? If I hold on for another few months I get a new one with the contract extention, but if I buy one now I could still trade in my old one to get the new one and then ebay the extra one... hmm... options options... and they all involve money...

Trouble with A Capital T, That Rhymes with P and That Stands for Pool!

When I got home from the trip there was a letter waiting for me that must have arrived a day or two after I left.  There’s a story here.

Back in October, I was driving a friend’s car and got into a fender-bender.  No one was hurt.  There was a little damage to my friend’s car, and the other car’s bumper got banged up, but it didn’t look like there was any damage aside from that.  Anyway, it turns out that my friend had let her insurance lapse, and I don’t have insurance because I don’t have a car.  Not good.  I got a ticket for driving without insurance and paid a fine and had my license suspended for a year.

The accident report had me at fault, which I expected, and soon after my, friend’s mom (the owner of the car) and I were contacted by the other driver’s insurance company to confirm there was no insurance coverage.  They said they were going to wait until all the estimates were in before taking any action.  I went to the legal clinic on campus and was given the sage advice, “Don’t buy anything big like a house or anything in the next several years, ‘cause they can take it from you.”  Pity, too, because I had great plans of real estate expansion during my grad career.

It seems that the estimates have become real life bills, because the letter that came for me was from a collection agency asking for a quite large sum that I obviously have no way to pay.  I got in contact with my friend and she told me that her mom was looking into options.

All this seems to me the way that these things usually go, and I wasn’t surprised by any of it.

Tonight I got the phone call.

Wow.  I had never been on the other side of one of these guys.  He was good, but in a kind of immature way.  First, he left a message on my voice mail that said something to the effect of:

Is it me, or does that sound suspiciously like the wording on those sweepstakes mailings or spam email?

In any case, I was on the phone at the time and the call came up ‘private’ on the ID, so I didn’t answer it.  I forgot that I had gotten a call, so I didn’t check my voice mail after I hung up.  About thirty minutes later (mind you this is in the evening, not business hours) I get a call from him.

He told me that I had to commit to paying the money within one hour, or the company would sue me and the owner of the car, and have my license revoked for ten years.  I began to explain my financial situation to him, but he didn’t seem to listen (frankly, not that I blame him for that.  I have no doubt he gets all kinds of sob stories).  He then said basically that I should ask my parents, family, and friends for the money (I’m not.  Those who know me please don’t offer.) saying that if his license were on the line that he would gladly pay [insert obscenely large amount much larger than what they claim is due here] to get it back.  Then he went on a minor spiel about how important driver’s licenses are.

Then I asked him if he had spoken to the owner of the car, seeing as how, as I understand things, we are both liable.  He said that he hadn’t talked with her and had no plans to.  Then he said he could get her on a three-way line and talk to us both, which I thought was just silly.  Then he did ask me if I thought she was trying to dump all this trouble on me by not taking care of all this.  I guess he was trying to see if he could make me suspicious or angry toward her.  Very interesting…

I will say that he seemed to be very good at the whole thing.  He spoke with a great deal of intensity and confidence.  When I said that I couldn’t and wouldn’t commit to anything within one hour and that I had no property or saleable assets, he turned that into an ‘outright refusal’ to pay.  I thought with all the legal possibilities, that that was a particularly nice twist.

Really, his main problem, aside from the pushy absolutist manner (You could get served in seven days!  You may have already won!) , was the one hour deadline.  Obviously, I know next to nothing about this legally, and I’m sure he counts on that when he calls people, but a one hour deadline seems more than a little bit ridiculous.  Also, telling me that he had no intention of calling and trying to talk to a person that they planned to sue seemed even more silly.  Wouldn’t they want to see if they could recover the money before they started legal action?  I can’t speak for her.  Why not talk to her yourself?

I realize that I’m making light of a very serious situation, and that may not be the healthiest way to approach this, but it’s what I do.  I get through stress by overanalyzing and making jokes.  And running.  And eating.

I am trying to see if there are any ways out of this mess.  It wouldn’t be the end of the world if I lost my license, but it would be very awful.  I certainly don’t want anything to happen to my friend or her mother, but I’m not sure what my options are.  I guess I’ll be heading to the legal clinic again tomorrow.  The snake-oil salesman did mention that he would be willing to drop the amount ‘significantly’ if I were willing to deal, so there might be something there.  Frankly, I would want to ask to talk with someone else from their company, but that would probably tick them all off and not necessarily get me anyone better.

Ugh.  Where did I get all of this junk?  I cleaned out my room and I thought it was mostly done.  Silly me.  I knew I had a desk in the garage (I moved it down there for the re-carpeting).  I had forgotten the boxes.  Oh sweet lord, the boxes.  What’s in all of them?  How can I accumulate all of this junk?  I can see the promise in a Buddhist renunciation of material things.  Except I can’t give up my computer.  I would be a bad Buddhist, but I must strive to be a lighter being.  I’m going to tackle the mess in the garage.  I’m going to tackle the mess in my new room (isn’t it funny how you never realize how much smaller a new area is until you try to cram all of the stuff you had in the old area into it?).

I must clarify my life.

Anyone want to buy a desk?
Posted by Overread at 5:21 PM 1 comment:

I had a big Italian dinner last night.  Cheeeezey bread and a little apple crisp thingie for dessert.  My landlords helped me move a little bit so I took them out to dinner.  I’ve still got a couple more car-loads worth of junk, but a friend said she’d help me out tomorrow, so I should be able to be out on time.

Ugh.  At least classes don’t start for a little bit.