crawling across the desert. He is bedraggled. His lips are cracked. His clothes are torn - he has tied a shirt around his head to shield himself from the merciless rays of the sun. He crests a dune and sees before him an oasis of crisp pure water. That oasis is his only chance for salvation.

It's only 9 papers away. I'm into the single digits. Finally.

By the way, I know it's all a mirage. I've still got the monster 3 hour essay exams to grade after that, but hey, the oasis is a goal to strive for, even when I know the sweet clear water will only turn to silica grit in my teeth.

There's another group of graders across from me. One howler they got must have been especially good. The guy reading in burst out laughing. He tossed the paper to his friend who also started laughing - loudly. All I heard was the quote, "Monkeys all over campus!" talk about intriguing. It could be as good as Snakes on a Plane

Also, dude over there reeks of pot.

Also, dude behind me is trying to sing along with the jazz standards on Starbucks Radio. He's failing miserably.
Posted by Overread at 1:20 PM 3 comments:

I almost trod on a black furry caterpillar. It was most distressing.

Also: Although the skittles, they call to me, it might not be the best idea to eat a bag before going on a run.
Posted by Overread at 6:10 PM No comments:

You Can Tell I'm Grading, Can't You?

Q Why does Lenin drink peppermint tea?
A Because all proper tea is theft.

Karl Marx goes to visit his friend Friedrich Engels, they have tea and cake, and Marx excuses himself to use the bathroom. As he flushes the toilet, he hears the unmistakable sound of a string quartet. He shrugs and goes back to Engels.
Over the next few weeks, Marx continues to visit Engels and use his bathroom, and every time he flushes, there's the sound of a string quartet.
Finally he confronts Engels: "Look Friedrich, every time I flush your toilet, I hear a string quartet, what's that all about?"
"Oh that," says Engels, "That's the violins inherent in the cistern."

An angel appeared at a university faculty meeting and told the dean that in return for his exemplary behavior, the Lord would reward him with his choice of infinite wealth, wisdom or beauty. Without hesitating, the dean selected infinite wisdom. "Done," the angel said, then disappeared. The other faculty members looked at the dean, who was surrounded by a halo of light. One colleague said, "Say something wise.” The dean sighed and said, "I should have taken the money." - Playboy's Party Jokes 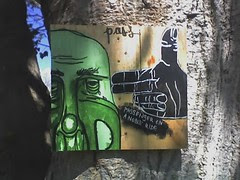 Giant exam today. Is there any place more unhealthy than a lecture hall in the spring full of people taking a 3-hour exam that is crucial to their grade? I haven't heard so much hacking and coughing and wheezing since that supporters of Philip Morris convention I stumbled into. Yeesh. I'm almost fully recovered from the ick that I got earlier, but how can my poor immune system hold out against that assault?

(And but the way, the (electronic) stack of papers that I have left to grade seems to be multiplying. Anyone have any essay prophylactics? And anyway, add another 50 essay exams to that pile. Happy spring break!)
Posted by Overread at 6:08 PM 2 comments:

Posted by Overread at 5:59 PM No comments:

I just got back from seeing “V for Vendetta.” I know, I know, frivolous frivolous.  Shouldn’t I be grading?  Well, yes, but I am now getting ready to grade, so the day still will be productive, so there.  Now that I think about it, productive may be a bit ambitious, but it’s best that I not think to hard about that lest I become sad.

The movie!  I should first say that I’m getting rid of the X out of ten review system.  I’ve never really liked how it makes certain movies ‘equal’ when they ain’t.

As I’ve mentioned about other movies, I was pretty well-disposed to this one before I went in the cinema, so there wasn’t much chance that I’d not like it.  So, big surprise – I liked it.  I liked it quite a bit.

There aren’t many blow-em-up movies with genuinely thoughtful ideas, and, while there are some over-wrought speeches, the film pushes its ideas across with minimum vocal soap-boxing.  The points it does push well – generally around the theme of ‘the slide to authoritarianism comes from fear’ come through clearly though.  I imagine that much of this depth of story is probably due to the background of the comic book (graphic novel?) from which the film is drawn, but I haven’t read them, so I couldn’t say.

The world, a fascist Britain, is very convincing, and they’ve gone to great pains to weave familiar points into the story.  It’s easy to recognize the talking head ideologues in the films ‘Voice of London.’  Stephen Fry (who I still think of as the guy in the old Black Adder show) comes through as a mash-up of Graham Norton and Benny Hill – complete with sped up tape of a chase sequence to that Benny Hill tune.  That the Voice of London is a drugged up egotist shouldn’t seem that far from our world, but his vitriol is simply take a few steps forward.  Fry’s character is similarly pushed a bit beyond, but is still very recognizable.

Another wonderful problem is central to the ambivalence that a lot of folks seem to be feeling about the movie.  ‘V’ is branded a terrorist, and it’s hard to argue that he’s not one.  He assassinates, spreads chaos, and well, terrorizes, and yet we are led to sympathize with him.  The movie does depict gruesome, bloody death, but only that of evil men and their henchmen.  The henchmen are often ‘Fingermen,’ the film’s version of brownshirts, as in the opening scene when the lead is saved from being raped by them, but they’re also occasionally just cops.  That which he attacks is undeniably evil, so are his bombings and killings excused?

I hope that people who take a blind faith point of view toward our current situation go see this movie.  I hope that they are drawn in to the film because they think Natalie Portman is hot, or because they liked Batman.   And I hope they think a little about the story.

All that bather said, it’s a very entertaining movie.  The filming is done quite nicely.  The expressions of a motionless Guy Fawkes are captured well through angles and lighting.  The acting is generally good – certainly above par for an action movie, which is, after all, what category this film will fill.  The fight-scenes are handled well in a suitably comic-bookish way, but without too much over-the-top super-heroics.

So without recourse to an X/10 system, I’ll just say I highly recommend this movie.  And anyway, Natalie Portman is hot.

Considerate Leader
(mouse-over for absolute truths about my personality!)

It's not nearly as cool as The Dear Leader, The Great Leader (or a little classier, the Eternal President), The Great Helmsman, Il Duce, Der Fuhrer, Man Of Steel (sorry Supes, you ain't the one!).... Hmm... Lenin doesn't seem to have a cool name like that, does he?
Posted by Overread at 3:20 PM 2 comments: