So, grades are due today, and yes, yes, I have been procrastinating more than a little bit.

So, I decided to grab the remaining papers and head out to the cafe near my apartment to finish up

What are the odds that I would have forgotten a crucial list of grades that need to be averaged in? Pretty good.

How excited am I about the prospect of a ride all the way back to campus to pick them up? Not so much.

How much do I want to pick numbers out of the all-embracing ether to plug into those hungry little spreadsheet cells? A heap.

Sigh... At least it's a nice night. It will be a pretty ride.

Bonus tips for café-guy trying to hit on café-chick: These two lines may not have been your best efforts:

ugg... lost the WEP key to the wireless network at home so I'm using some unknowing neighbor's interweb tube. Thanks neighbor!

Yesterday actually... and I'm still not convinced about the accuracy...but take a look at this! The rat....

You folks did quite nicely last week. Let’s do a little mopping up here.

Second time around, I'm still believing
The words that you said
You said you'd always be here
And love forever still repeats in my head

Yes, Zerodoll, it was Lita Ford with “Kiss Me Deadly.” You may now be proud of your shame :)
Camera, I did mean the wrestler in Ms Lauper’s video – bonus points if you remember his name (I do, and I can’t for the life of me figure out why)

Glad you liked the pre-quiz quizzies. I think I’ll do some more of those! Maybe today will be half and half… we’ll see… I’m pretty sure that we’ve got at least one repeat this time around, but there’s a good reason, and I think I chose different lyrics this time.

So, it may be too soon, I know
The feeling takes so long to grow
If I tell you today will you turn me away
And let me go?

Danger in the game when the stakes are high
Branded, my heart was branded while my senses stood by
I’ll never find another girl like you, for happy endings it takes two
We’re fire and ice, the dream won’t come true

When lights goes down, I see no reason
For you to cry. We’ve been through this before
In every time, in every season,
God knows I’ve tried
So please don’t ask for more.

Ok, jeeze… I’ve got to stop or I won’t have anything for next week. Enjoy folks!
Posted by Overread at 4:57 PM 5 comments: 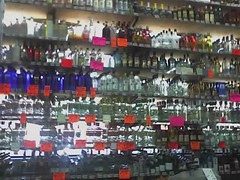 Where Are We Going? What Am I Doing In This Hand-basket?

Two links from Boingboing to get my depression on today.

It shouldn't be a surprise at all that the head of the Girls Gone Wild franchise is sickening beyond words, but anyone who reads this LA Times article about him and doesn't feel the bile rising in their throat has to be dead to the world. I have to admit that I'm not completely convinced that there isn't enough blame and shame to spread around to many people involved in those productions.
The thing is though, even if the moral line in the sand is very different for people who have grown up being photographed and presented as images their entire lives, even if the MySpace generation takes voyeurism as a right and exposure as agency, in my opinion, that still doesn't make his any less despicable.
I don't think that technology has fundamentally altered the moral nature of people. I do think that perhaps in the past, someone who looses their mind and wants to take it out on the world would have less impact with a sword or knife than might be possible today with a handgun or anthrax canister. In the same way, a man like this guy is able to leverage a personal baseness into something with much more impact thanks to technology.
I'm no luddite. I think technology brings benefits that easily outweigh the dangers of exponential spread of things I don't like. I'm not even opposed to most pornography, but this guy... This guy makes me sick.

The second link was to David Byrne's reaction to a screening of a new move called Jesus Camp. I think the lock-quote is this one:

I kept saying to myself, “O.K., these are the Christian version of the Madrassas (those Islamic religious instructional schools in Pakistan and elsewhere, often financed by Saudi oil money)...so both sides are pretty much equally sick, there’s a balance." (Although it must be said the Madrassas provide some regular education and literacy where no other option is available, they do community work that is non-religious...and they take in aimless troubled youth.)

I can't comment in too much depth, because I don't know the details of the situation, but the idea of creating Christian Madrassas fits very snugly with what I remember of many of the people I knew growing up in the buckle of the Bible Belt.
In so many ways, we become as intolerant as the Saudi princes, under the banners of not just Christianity, but Capitalism, Democracy, Free Trade and perhaps the worst battle cry, because, being so vague, it can mean anything to anyone: 'freedom.'
We're bringing those other people 'freedom.' Freedom to choose to be Christian. And now, it seems that in North Dakota, we're training the soldiers in the war to bring that freedom into the government of the United States.
Posted by Overread at 12:09 PM No comments: